When it comes to unusual, it doesn’t get much stranger than the paddlefish. The paddlefish takes its common and scientific names from its distinctive snout, which is greatly elongated and flattened into a paddle shape. One of Oklahoma’s largest fish, the paddlefish feeds on tiny zooplankton (microscopic insects) and like a shark, it has a completely cartilaginous skeletal system.

The paddlefish was alive when dinosaurs were rumbling around in the late Cretaceous Period. Paddlefish are one of the most unique fish in Oklahoma. They can live up to 50 years and range throughout the U.S from Montana to Louisiana. In Oklahoma, they are found mainly in the Grand Neosho and Arkansas river systems.  The Wildlife Department promulgates rules to increase the protection for paddlefish to ensure this prehistoric fish will thrive through a few more Ice Ages. 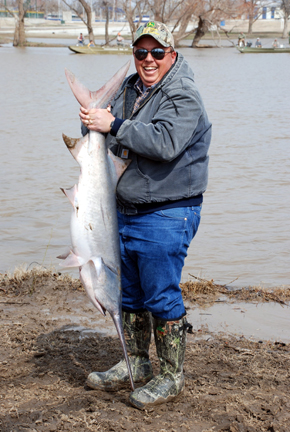 Male paddlefish are old enough to spawn when they are four to nine years. Females spawn when they are 6-12 years old. Spawning season is from March through June, when spring rains raise the water levels of rivers and water temperatures reach 50-60 degrees. Males and females gather in schools and release their eggs over gravel or sandbars. This is called "broadcast spawning." By the end of their first year, baby paddlefish grow about 10 to 12 inches. In Oklahoma, where water temperatures are warm, they can live up to 25 years.

Paddlefish are caught by snagging, usually beginning sometime in March and ending in late April, during their early spring spawning run. This prehistoric fish can be caught by snagging with a stout surf rod, heavy test line, and a large, barbless treble hook.

Paddlefish were once very abundant throughout their range, but have declined in numbers. Threats to paddlefish include:

Construction of dams which have affected breeding and feeding patterns

In 1992, fisheries biologists began an effort to re-introduce paddlefish to waters where they has become locally eradicated. Dams on several rivers had blocked the annual movements of paddlefish in several river systems. Hatchery professionals raised young paddlefish in Byron and Tishomingo and then released them in Kaw, Oologah, Texoma, and Hugo lakes.

The fisheries division of the wildlife department have placed bands on thousands of paddlefish in lakes statewide. These bands are an important research tool allowing biologists to learn about population abundance, individual growth, and annual harvest. Anglers can assist in this effort by reporting banded harvest, not removing bands from released fish, and knowing the regulations. This research is being paid for through the federally-administered State Wildlife Grant.

What do I do if I catch a paddlefish with a band on its jaw?

If you happen to catch a fish with a band, we want to know!  On each band is a letter followed by a series of numbers along with a phone number or web address.  We prefer that if you catch a fish and plan to release it, that you leave the band in place, record the band code, and contact us with the information at your earliest convenience.  If you harvest the fish, please feel free to keep the band, but again we ask for you to contact us with the band information at your earliest convenience. Please don't remove the bands from released fish.

Paddlefish jaw bands are a valuable research tool allowing biologists to estimate population abundance, monitor annual harvest and examine individual growth and movement. We would like to know where and when the fish was caught, if it was harvested or released, and if the band was removed if released.  Other valuable information about the fish such as weight, length (measured from the front of the eye to the fork of the tail), sex (only if harvested), or abnormalities is also useful. If the band is stamped with a web address, please enter your band information there. Otherwise, please call the phone number stamped on the band.