Northern bobwhites wander along a country road. This year's August roadside surveys showed a marked increase in western Oklahoma, but a lower population index across the remainder of the state. (Tell Judkins/ODWC)

The Oklahoma Department of Wildlife Conservation (ODWC) has conducted annual roadside surveys in August and October since 1990 to provide an index of annual population fluctuations of quail. The number of quail observed are reported to provide an index of quail abundance and indicates reproductive success. ODWC employees currently survey 83 routes in 75 of Oklahoma’s 77 counties. Oklahoma and Tulsa counties, both almost exclusively urban landscapes, are not surveyed.

The state is divided into geographic regions (Figure 1) and ecoregions (Figure 11) to compare the index year to year. By looking at both divisions, biologists get a more precise view of on-the-ground conditions in each county. These divisions also can give hunters a better idea of conditions in the county they intend to hunt. 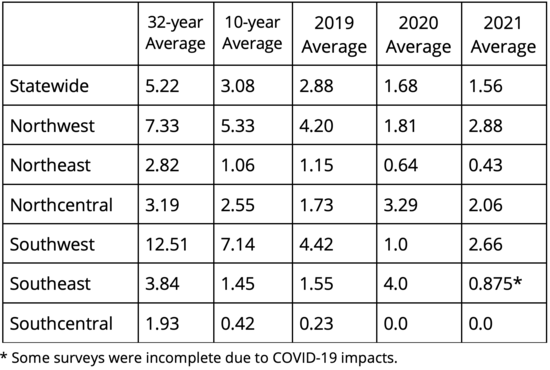 Peak production appears to have occurred early in the nesting season (mid to late June). This early hatch could be playing a part in lower August survey numbers, as older juvenile birds may be less likely to stay in brood groups while traveling. However, anecdotal reports since these surveys were conducted indicate sightings of several broods of multiple age-class young.

The indexes in the northwest and southwest geographic regions of the state improved from the 2020 survey. All regions of the state are currently below their historic 31-year average (Figures 3-8). The late-February winter storm brought the potential for negative impacts, which most likely were more severe in areas of marginal habitat quality.

Rainfall throughout the spring and summer has led to a cooler growing season, with a bountiful crop of insects and forbs. But drought conditions are beginning to develop in patches across the state, primarily in the northwest region. Figures 9 and 10 show the drought and rainfall conditions across the state.

Given the current drought and rainfall conditions, biologists can get a better look at bird numbers by analyzing surveys on an ecoregion basis. Figure 11 shows the nine major ecoregions in Oklahoma, while Table 2 gives a comparison of 2020 and 2021 survey results by ecoregion. In ecoregions that had less rainfall through the nesting season, such as the Rolling Red Prairie, lower numbers of birds were observed. 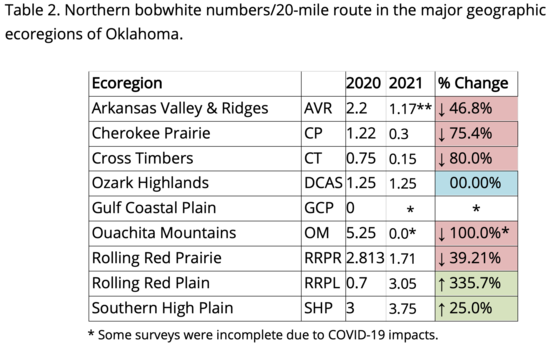 Anecdotally, numerous brood reports over late August and early September were received. Over the 32 years of these roadside surveys, the August surveys have not always been the most reliable when it comes to forecasting the quail hunting season. As with all roadside surveys, it is important to note that with such a small sample size, even a tiny change in bird observations can show up as huge shift in a route’s data. The annual October roadside surveys will provide a better indication of what the upcoming quail season may have in store.

(For more information and articles about quail conservation and management in Oklahoma, go to the Quail Species Page on ODWC's website.) 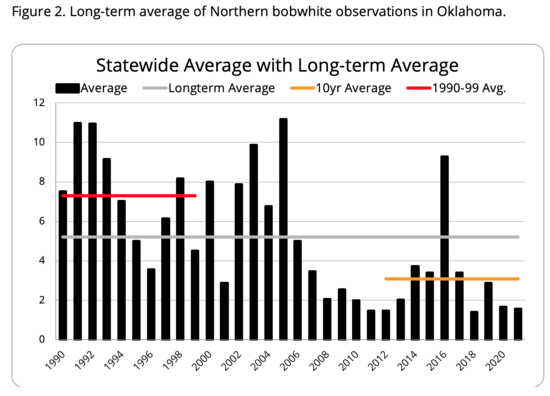 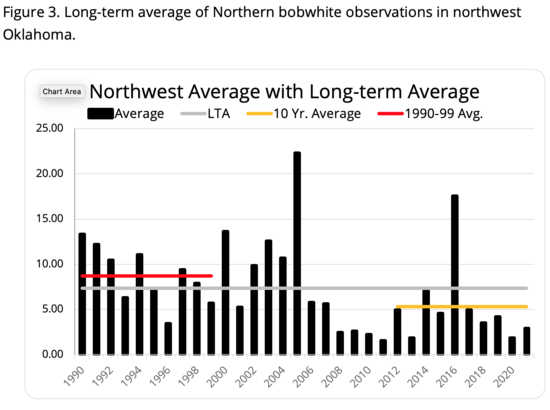 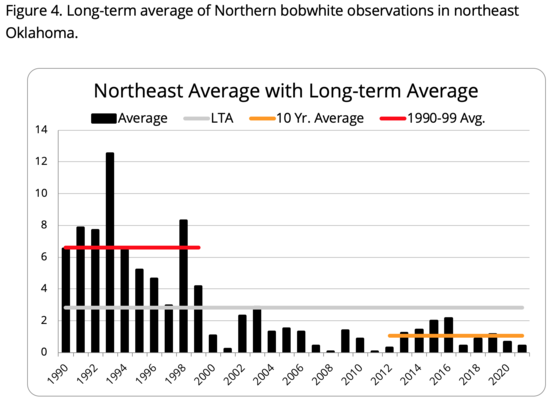 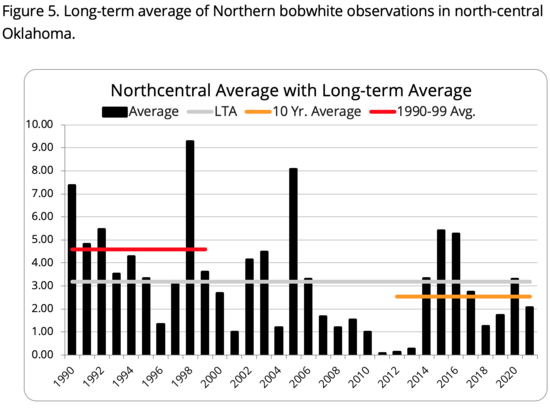 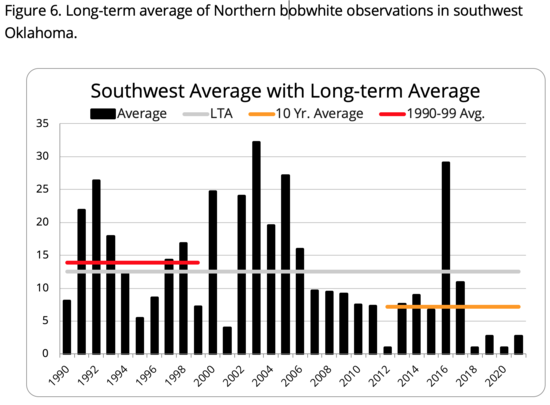 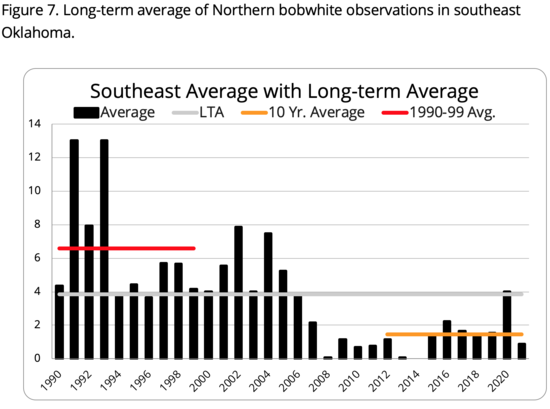 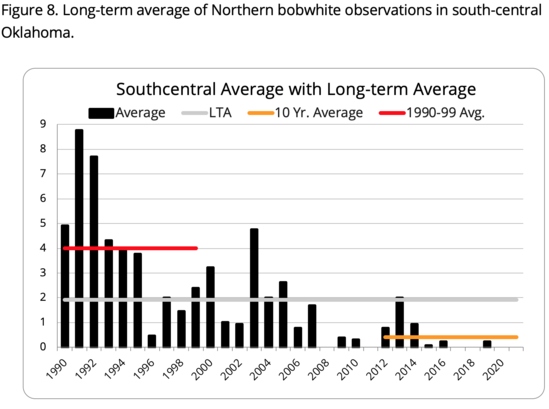 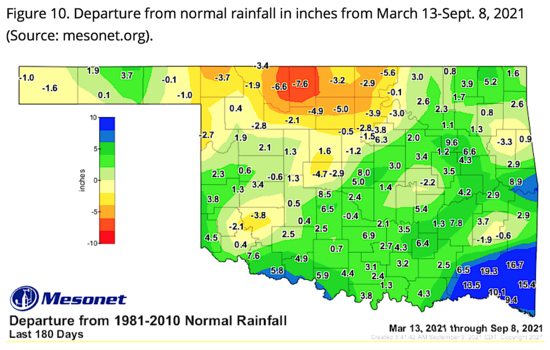 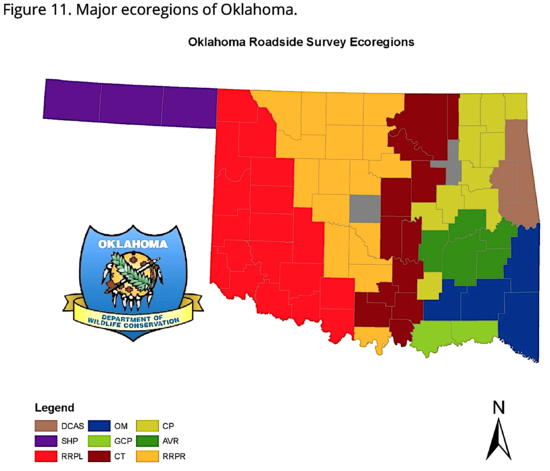