Tuesday, June 14, 2016, proved to be a record-setting day at the Wildlife Department's Northeast Region Office near Porter. That's the day two hunters from Muskogee had their elk antlers scored, and they each ended the day as state record-holders.

Bob Hamlin is the owner of the new typical elk record, which scored 338 4/8 when measured by official scorer Russell Perry, a wildlife biologist for the Oklahoma Department of Wildlife Conservation. Hamlin's elk scored about six points more than the previous record of 332 1/8 held by Wayne Munn of Rush Springs.

The first nontypical elk submitted for a Cy Curtis Award belongs to Jerry Jaynes. It scored 325 7/8 when measured by Perry.

To be eligible for a Cy Curtis listing, an elk harvested in Oklahoma must score at least 270 in the typical category and 310 in the nontypical category. 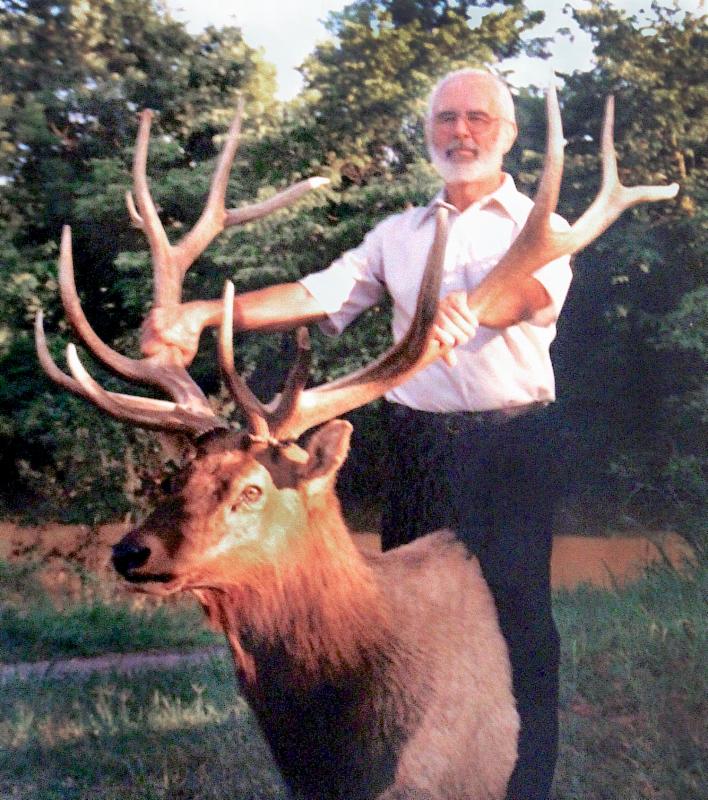 Hamlin has heard the same thing many times over the past 22 years. "Everybody kept telling me it was the biggest one they'd ever seen." Even Hamlin admits that he was "fascinated by how big he was" after he brought down the 7-by-6 bull elk that would eventually capture the state record. The hunt was 22 years ago. And that's how long Hamlin has had the state-record elk hanging on his wall -- without even realizing it.

In all fairness to him, Oklahoma only began recognizing a state-record elk in 2014. So Hamlin only missed out on the notoriety for a couple of years.

Hamlin, now 81, recalls how it happened back in 1994. For at least a decade, he had entered the drawing for a Wildlife Department controlled hunt for elk. But he read in the newspaper that the hunter drawn for a Cimarron County elk hunt must secure a landowner's permission to hunt on private land. Since he had no permission, Hamlin had nearly convinced himself there was no need to put his name into the drawing. But on the last day for entering, Hamlin talked himself into it. And, of course, his name was drawn.

Hamlin enlisted the help of the local game warden and was able to find a place and get permission to hunt. On Dec. 17, 1994, Hamlin walked to an area that had waist-high brush and no trees. Soon, a herd of about 50 elk showed up, and it looked to be all cows. "Then this bull came out; he was bringing up the rear end." Hamlin downed the 7-by-6 elk with a 250-yard rifle shot to the chest.

He debated whether to have the animal mounted, because "I wasn't into the mounting thing." But at the urging of others, he did. "That was the best thing I ever did." 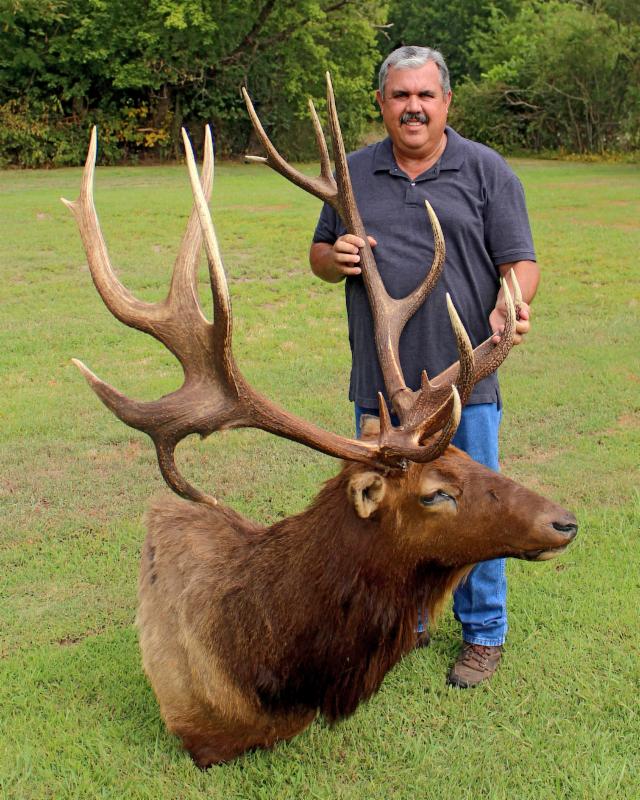 Jerry Jaynes of Muskogee with his nontypical elk mount, recognized as the state record June 14, 2016, with a score of 325 7/8. (Photo Provided)

Jaynes took his 9-by-8 nontypical elk Dec. 15, 2005, in Comanche County. It was the final day of his Controlled Hunt, and he decided to hunt in a different area than where he was the previous day.

"I had seen a lot of cows," he recalled. "But then I walked up on three bulls grazing." One of the bulls was slightly bigger, and it had a drop tine on one side of its rack. "That's why I decided to harvest that one." The elk was only about 40 yards away, but he had to wait for the animal to move into a clearing to get a good shot.

"I thought he was a pretty decent elk. I didn't know it would ever be a state record."

Jaynes, 54, said he had been entering the Controlled Hunts elk drawing for about 25 years before his name was selected in 2005. He's been on several Controlled Hunts for deer over the years. He's also hunted elk in Colorado several times, but has yet to take one there.

Oklahoma's Cy Curtis Awards Program began in 1972 and originally recognized white-tailed deer and mule deer only. Starting in 2014, the Wildlife Department's official hunter recognition program expanded its listings to include elk, bears and pronghorns that exceed minimum qualifying scores. For details on the Cy Curtis program and to learn how to apply for an award, go to the Cy Curtis page at wildlifedepartment.com.

The Wildlife Department's Controlled Hunts Program gives hunters a chance to put their name into a drawing for some of the state's most-sought-after hunting opportunities. Controlled hunts for deer, elk, antelope and turkey are conducted in locations where unrestricted public hunting would pose safety concern or where overharvesting might occur.

In the 2015-16 Controlled Hunts Program, about one in every 22 applicants had his or her name randomly selected for one of 5,760 permits available. The hunt locations are normally posted on the Department's website at wildlifedepartment.com by March 15, and the application deadline is May 15.